The Mareva injunction is the best tool available for victims of fraud by ensuring that a defendant’s assets do not vanish before a plaintiff can collect on a judgment. Especially in the context of an alleged fraud, Marevas are typically sought ex parte–without notice– to the defendants. It is not difficult to see why. If given advanced notice that their accounts may be frozen, accused fraudsters may dissipate their assets leaving themselves judgment proof and their victims without recourse.

In the case of 2092280 Ontario Inc v Voralto Group Inc. 2018 ONSC 2305 (“Voralto”), the appellant-plaintiffs were a landlord and contractor allegedly defrauded by the respondent-defendants in a waste scam. Waste scams are a common fraud that involve the illegal dumping of waste on private property freeing the perpetrators of proper disposal costs. The plaintiffs brought a motion ex parte for a Mareva to freeze the defendants’ bank accounts.

In light of the delay in pursuing a remedy, the delay in advancing this claim for injunctive relief, the fact that the defendants have not been served, and the lack of evidence that these Defendants are dissipating assets, I am not prepared to grant relief without giving them an opportunity to respond.

The plaintiffs sought to appeal on the belief that giving notice to the defendants would defeat the entire underlying purpose of a Mareva injunction. The Rules of Civil Procedure (the “Rules”), however, provide no mechanism to appeal an Order without notice to the defendants. Rules 61.03 and 62.02 of the Rules, which govern appeals to the Divisional Court from an interlocutory order, require that notice be given to the opposing parties.

At the appeal, the plaintiffs argued that ex parte motions are brought in two separate and unique contexts. The first being urgency; where there is not enough time to serve a defendant. The second, and the context applicable to Marevas, being stealth. They argued that delay or timeliness is not a relevant factor for ex parte motions brought in the context of stealth. They relied on the fact that timeliness is not one of the five requirements for a Mareva injunction as set out in the case law.

The Divisional Court held that:

Ultimately, the Divisional Court allowed the appeal and granted the Mareva injunction, reasoning that:

The Mareva injunction is an important tool for Plaintiffs to try and recover their losses due to fraud or theft. A requirement to notify the perpetrators of a fraud in advance of an impending Mareva injunction would significantly waterdown an important remedy for protecting innocent victims. Judgments for damages cannot reasonably be expected to be affordable or collectable against fraudsters. If funds cannot be frozen in advance, a vital arrow in the civil law’s quiver to address serious fraud will be lost. This is a narrow exception to the general rule against prejudgment execution. It is therefore a remedy that is not readily available. However, where evidence discloses a strong prima facie case that Defendants perpetrated a premeditated, substantial fraudulent scheme against innocent victims, the law’s reluctance to allow prejudgment execution must yield to the more important goal of ensuring that the civil justice system provides a just and enforceable remedy against such serious misconduct.

To conclude, in Voralto, the Divisional Court has recognized the importance of stealth in the context of fraud and motions for Mareva injunctions. This case will act as a strong precedent for fraud-victims seeking civil remedies and provide a process for appealing ex parte orders where stealth is key.

P. James Zibarras and Justin W. Anisman of Brauti Thorning Zibarras LLP were counsel for the successful appellants. They can be contacted for further details about this decision.

Contact Justin W. Anisman, the author of this blog, about any employment law related questions or issues you may be facing. Call 416-304-7005 or email him at janisman@btzlaw.ca.

Justin W. Anisman is an Employment Lawyer at the Toronto law firm Brauti Thorning Zibarras LLP. Justin advises both companies and individuals in all aspects of employment law including wrongful dismissal, human rights and discrimination.

The publications made on this website are provided and intended for general introductory information purposes only. They do not constitute legal or other professional advice, or an opinion of any kind. Speak to a professional before making decisions about your own particular circumstances.

I am thrilled to be featured on the front page of law times along with my firm’s managing partner, James Zibarras. 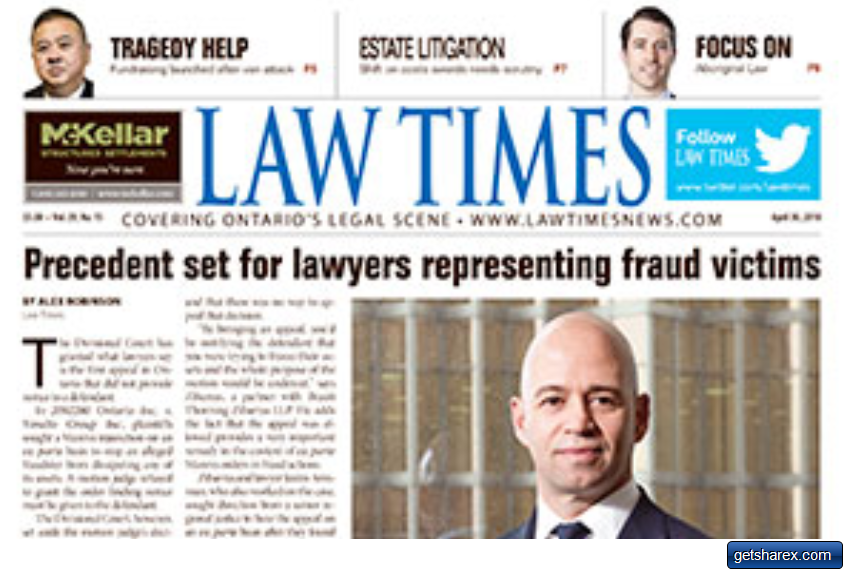